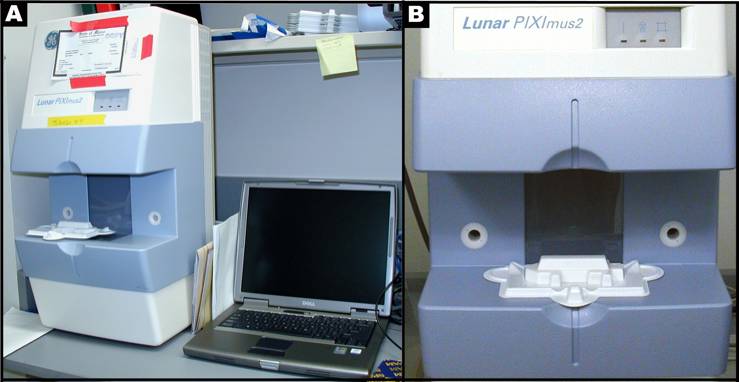 Mice are obtained at 8 and 16 wks of age (DOB +/- 3 days) from production rooms and are acclimated to test conditions for at least half-hour.

Collecting image scans:
a. The PIXImus densitometer apparatus is first calibrated with a "phantom mouse" according to manufacturer's protocol.
b. Then each mouse is placed on the specimen sticky tray (body must be within blue line on the tray) under the PIXImus beam path. The tail is placed alongside the body, the front legs are extended to the side, and the neck and spine are gently straightened.

c. Trays are positioned so that the area of the head is always oriented toward the left from the investigator's point of view, and the mice are position dorso-ventral so that the entire body and tail are measured in the scan.
d. The X-ray process to obtain a single full scan is approximately 5 min; specific regions of interest (ROI) are then subsequently defined. 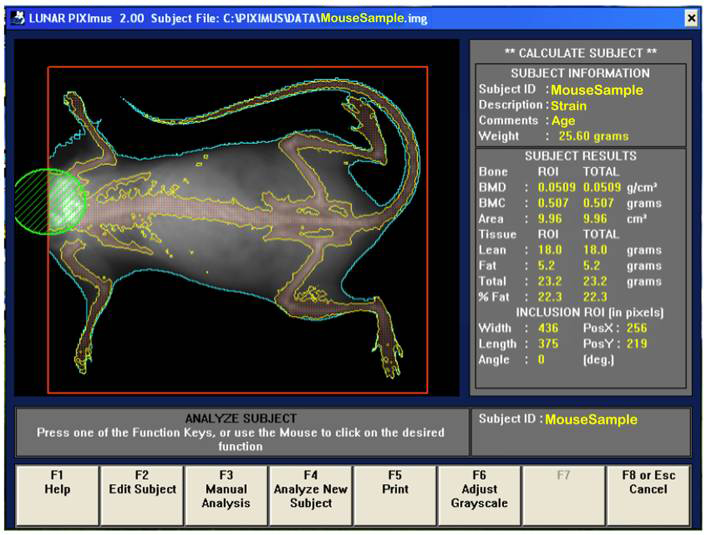 e. Disposable plastic trays, with sticky tape for immobilizing mice, can be saved and re-used after a thorough cleaning and disinfections.

Measurement acquisition and image scan analysis
a. Based on PIXImus validation studies (Nagy, 2000; Johnston, 2005) DXA-estimated measurements of fat tissue correlate well with measurements obtained from chemical extraction. This is made possible by developing software versions with equations that adequately correct raw DXA measurements.
b. Following the completion of an image scan the DXA system automatically implements specialized software to identify bone tissue from either fat tissue or from lean tissue based on the resulting X-ray densities at two distinct energy levels (Pietrobelli, 1996; Johnston, 2005).
c. Visually, following the completion of a scan, the mouse sample is then outlined with red and green colored circle and square to define specific regions of interest. 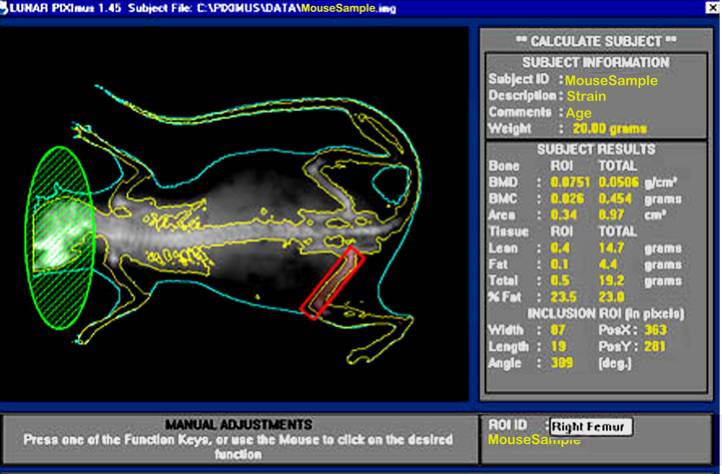 Bone mineral content (BMC) is generated from PIXImus density scans which are assessed for accuracy using a set of 0.0 mg to 2,000 mg of hydroxyapatite standards.

According to the DXA system, bone mineral content (measured as the attenuation of the X-ray by the bones being scanned) is divided by the area (also measured by the machine) of the site being scanned to obtain bone mineral density (BMD):